As part of their tour of Fife, Fife Contemporary’s Craft Pods have visited various libraries and last year, paid visits to a couple of High School.  This aspect of the tour was extended in 2017 when they paid their first visit to Levenmouth Academy in Buckhaven, courtesy of the department of art & design. They were sited in the school’s library where they sat quite happily for 2 weeks between a display case of trophies and a computer terminal! 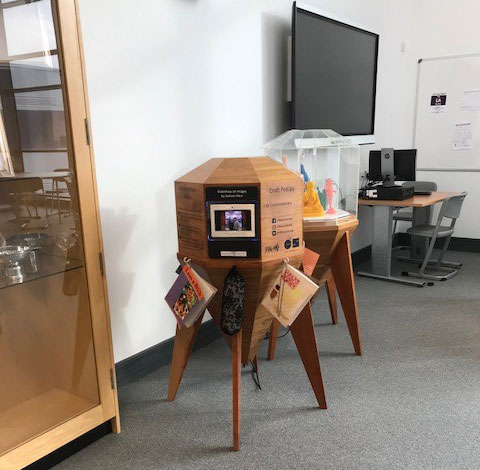 During their 2 weeks’ stay at the school, art & design teacher, Claire MacLeod, introduced them to many of her pupils, and in their words, here’s what they thought of them:

“The pods have certainly gained a lot of interest by our Levenmouth pupils and staff alike.  Many have commented on the, ‘strange wooden things,’ on view in the Library creating great intrigue alone from their stature and appearance.  Jasleen’s work emitted many childhood memories evoking sentiments of the objects and people we hold close to our hearts.  It is therefore fair to say that the pods have been greatly welcomed by all and is such a fantastic way in which to showcase exhibits and bring the arts to Levenmouth.  We cannot wait to see what is next! ” Claire MacLeod

“We think the pods are a very interesting way in which to display Jasleen’s work.  We especially like the colours she has used, her source of inspiration and particularly the fact it is interactive.   The information on her was very descriptive as it told of her past and her family, especially the interesting short film.  Her work actually intrigued us, as we wanted to research and find out what materials she actually used.”
Katie Adams and Neve Adamson, S4 Pupils

“I think the pods are very intriguing.  Jasleen’s work is so inspiring and has encouraged me to pursue art.  Her film helped me understand her work more and I would love to be as talented as she is.” Kelsey Vanbeck, S1 Pupil

“The pods are very interesting as I am a fan of this stuff.  There is lots of information to gather on Jasleen’s work, which is gobsmacking, as it looks so realistic, precise and detailed.  Her short film was also good, eye catching and definitely made me stuck to the screen.”
Robbie Christie, S1 Pupil

“I think the pods looked kind of weird as they are not something you would see day to day.  Jasleen’s work was supercool and good to look at but I wish I could have held and touched her work.  She has an amazing family who helped inspire her.” Charity Nyoka, S1 Pupil

“I thought the pods were good and really detailed as well.  I think Jasleen’s work is very artistic and unusual.  The information on her is quite in depth and it helps you understand what she does.  I liked the short film but I really liked looking at the statues in person.  Overall I thought her art was really awesome.” Bryson Inglis, S1 Pupil 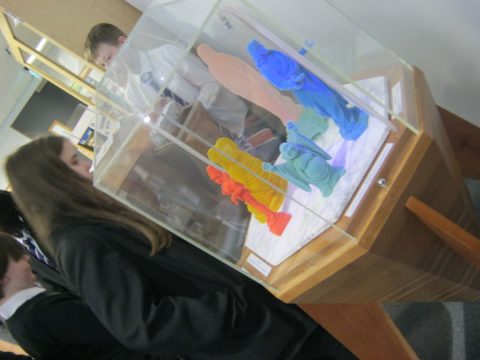