FCA&C have recently added some beautiful products to their online shop by ceramist Jo Davies.

Jo grew up in rural Herefordshire overlooking the hillsides of the Golden Valley. Renowned for its beautiful landscape, rolling hills and idyllic villages, Herefordshire is home to many famous UK studio potters. This was inspiration to Jo as she began her first creative explorations in clay, working intuitively with the material, even in these early days.

Her interest progressed and she gained her first degree from Bath School of Art and Design where she learnt a significant breadth of the ceramic art form.  She graduated in 2002 and was recently asked to exhibit with selected alumni in an exhibition celebrating the Ceramics course at Bath.

Soon after graduating from her first degree, Jo set up a studio and continued her practice. During this time she was a resident artist at Portsmouth University and exhibited widely within the UK.  Recognising her need to further her education she was given a place at the Royal College of Art in 2005 to complete a Masters.

After graduating Jo set up her London studio where she continues to make and develop her work. Jo exhibits UK wide and internationally, continuing to make all her work by hand.

We chatted with Jo to find out more about her ceramic work and what she plans to do next.

What’s your background and what inspired you to become a ceramics designer?

I have been working with clay since I was a teenager, being lucky enough to have a ceramics department at school and growing up in Herefordshire, the home of many well—known studio potters like Mick Casson, my awareness of ceramics as a craft form was there from an early age.  With this as my backdrop I worked with clay intuitively, always enjoying the creative capacity that it afforded me but also the structural concerns that arose in the making.  I never meant to still be working with the medium now at that point but I just knew I loved to make things with it, it’s simply a journey that hasn’t ended yet and won’t for a long time to come hopefully!

How would you describe your customers?

My customers tend to be culturally aware, particularly of the visual arts and crafts.

Certain designs like the Zsa Zsa Vase, Barbara Vases or Mona Vase, because they are investment pieces, are often bought by individuals who could be described as collectors.

What is your favourite piece from your collection?

I find this question too hard!  I have a love/hate relationship with the Zsa Zsa Vase as it feels appropriately sculptural and functional but also gives me the greatest hardship technically because I’m asking the porcelain to do something it shouldn’t really be doing.

What are the highlights of your career so far?

In 2011 I was granted Arts Council funding for an exhibition I was curating called Talking In Clay.  The show also included a weeklong schedule of events by the exhibitors and was organised and promoted by me.  This was an amazing challenge and I felt very proud to be entrusted with it by the Arts Council, Hereford Council and Hereford Courtyard Arts Centre.

Another highlight of 2011 was being invited to exhibit my work at the Designers and Makers Shop at Somerset House on The Strand.

What can we expect to see from you in the future? 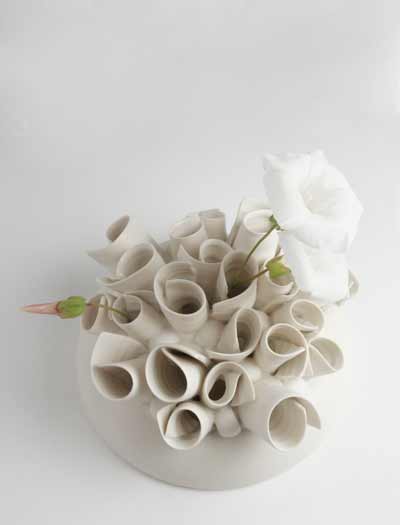